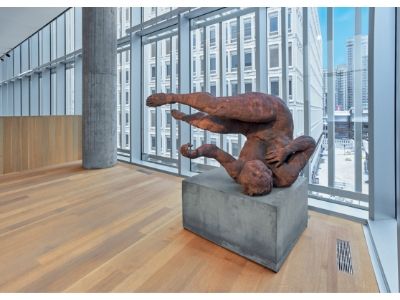 An hour before the event, passes for the remaining seats will be distributed free of charge on a first-come, first-served basis.

On the 18th anniversary of the terrorist attacks on the United States on September 11, 2001, artist Eric Fischl will discuss the conception and reception of his sculpture Tumbling Woman (2002) which was created in homage to the victims of these tragic events. (An edition of this sculpture is currently on view in the Michael and Renata Hornstein Pavilion for Peace at the Montreal Museum of Fine Arts.)  Tumbling Woman was initially designated for the lower concourse of Rockefeller Center in New York City.  However, when it was installed in 2002, the sculpture was met with sharp criticism by certain reporters who believed it too forceful a reminder of the recent trauma. Fischl understood the sculpture differently. In his words, “It was a sincere expression of deepest sympathy for the vulnerability of the human condition. Both specifically towards the victims of September 11th and towards humanity in general.”  On September 11, 2019 Fischl will share his thoughts about the importance of this work to his practice and about the broader experience of visualizing the trauma of terror.